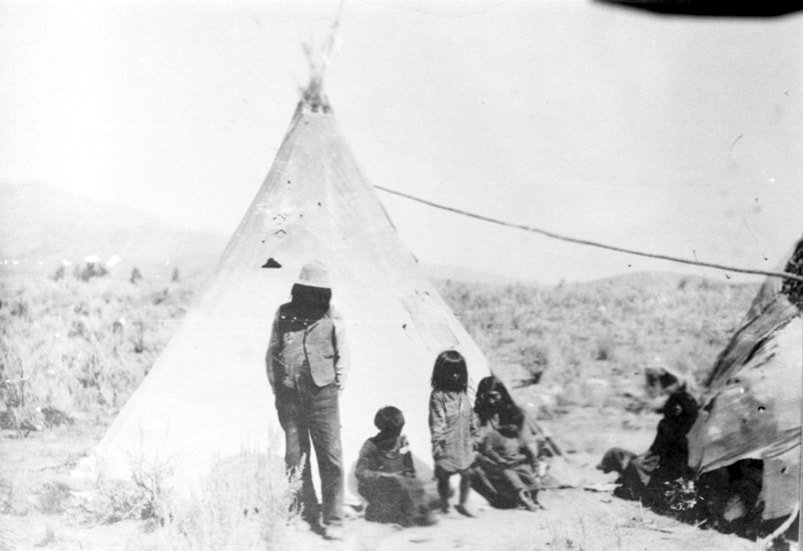 The Sheepeater people, a band of the Shoshone tribe, were the original inhabitants of the Land of the Yankee Fork. They produced fine skin products, praised both by other tribes and by white fur traders. Other Natives referred to them as "hunters of big game," from which they received the English appellation of "Sheepeater.” Groups of the Shoshone and Bannock tribes would seasonally hunt buffalo, elk, deer, and rabbits, fish for salmon, and gather seeds and pine nuts in this region of Idaho. Unfortunately, the Sheepeaters were often unjustly blamed for violence in the region, particularly for the Loon Creek Massacre at Oro Grande in 1879, in which Chinese miners were murdered. Using this incident as justification, in the summer of 1879 a military campaign was launched to move the Sheepeaters and their relatives in other Shoshone and Bannock communities to the Fort Hall Indian reservation. Such forced removal disrupted the traditional livelihoods of the Shoshone-Bannock peoples and their ties to this land.

During the early summer months, Chinook salmon return from the ocean to spawn in the Yankee Fork. Under treaty rights, members of the Shoshone-Bannock tribes fish for salmon in much the same manner as their ancestors did hundreds of years ago. Although only tribal members can fish for salmon, fishing for rainbow trout, cutthroat trout, and whitefish is allowed by anyone with a valid fishing license during the fishing season.

Today, Salmon-Challis National Forest has partnered with other entities such as Bonneville Power Administration, JR Simplot Company, Trout Unlimited, the Shoshone-Bannock tribes, and the U.S. Bureau of Reclamation to restore fish habitat for Chinook salmon, steelhead, cutthroat, and bull trout in the Yankee Fork River. These restoration projects allow for ecological revitalization following the impacts of mining, dredging, and logging in the area, while also reconnecting tribal youth with the land and resources.