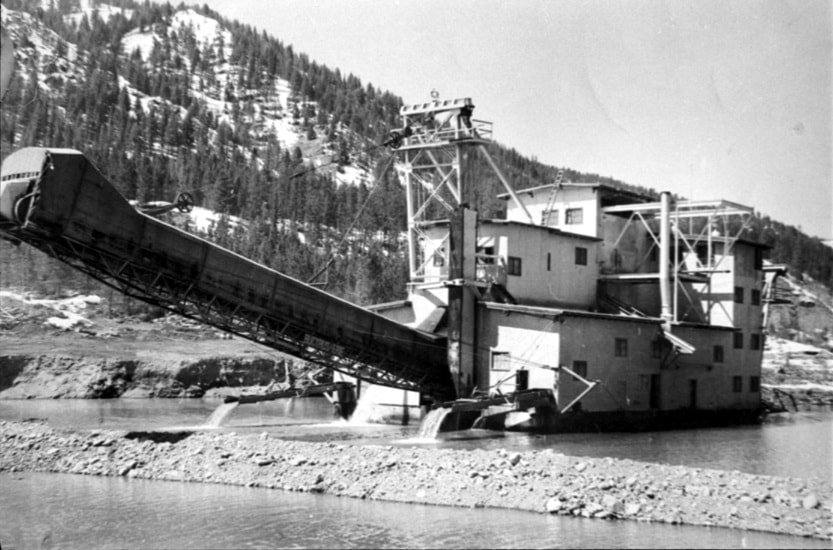 After the Yankee Fork mining boom of the late 1800s, the next large mining endeavor began in 1939 when the Silas Mason Company out of New York decided to dredge the Yankee Fork valley for gold. The Bucyrus Erie Company from Milwaukee was contracted to construct the dredge. Equipment and materials were shipped by train from across the country and then put on trucks to travel from Mackay or over the Galena Summit from Boise. Construction began on April 1, 1940 and was completed on August 24th of the same year. The dredge operated from 1940-1952, stopping for World War II from 1942-1946, and then again when the Snake River Mining Company (subsidiary of Silas Mason) sold the dredge to J.R. Simplot and Fred Baumhoff in 1949. The dredge stopped operating in 1952 and sat abandoned for years until it was donated to the U.S. Forest Service by J.R. Simplot in 1966. In 1980, the Yankee Fork Gold Dredge Association began providing guided tours to the public.

Did you notice the miles of dredge tailings on either side of Yankee Fork Road? The dredge only collected the fine gold pieces, throwing out any rock or gravel that was too large to filter through the trommel to the sluice boxes. These tailings piles show the landscape change and environmental effects of dredging activity.